In the absence of our yet-to-be-constructed veggie patch, we decided to do some veggie gardening on a smaller scale this year, and to be a bit more experimental.

After reading an article online about a US gardener who had great success growing tomatoes by planting them around a half buried 50 gallon drum of water (with holes drilled in the sides and bottom), we decided to adapt the idea and try it out.

Growing Tomatoes
We used a 20 litre bucket, the sort that is often put into recycling by commercial kitchens.  You can also buy them brand new for about $10 at Bunnings.

At the bottom edge, we drilled 4 x 3mm holes on either side, and then repeated the process about half way up the bucket.  The original plans suggested to drill a lot more holes, but we decided to try less in the hope of creating a slow release watering system.

We then prepared the soil by digging in lots of manure, compost, and some slow release organic fertilizer pallets.

The bucket was half buried in the centre of the patch, so that the holes on the sides sat at ground level.  We planted a tomato seedling on either side, and used an old piece of wire mesh to surround it and provide support for the growing tomato plants.  Then we popped a couple of shovels of cow manure in the bottom of the bucket, to help give extra nutrients to the plants each time we watered.  We finished off the patch with a nice thick layer of lucerne to help hold in the moisture for the surface roots.

Here is the result after 9 weeks.  Our plants are strong and healthy, and our first batch of Green Zebra tomatoes is almost ready to pick. 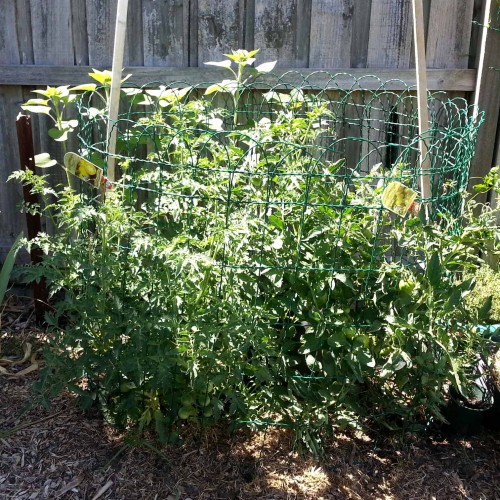 In the first few weeks, we watered around the base of the tomato seedlings to help them establish.  But after 1 month, we’ve just been filling the bucket 2-3 times per week, depending on the weather.

Growing Cucumbers
Inspired by my dad’s great success at growing cucumbers hydroponically, we decided to trial the bucket method for cucumbers as well, based on the theory that they seem to thrive when there is ample water available.

Here is the construction of our cucumber patch.  We drilled holes to allow for 4 evenly spaced planting areas, rather than two (as for the tomatoes).  After constructing a simple pyramid with old tomato stakes, we planted 2 cucumber seeds near each post.

The seeds we used were Diggers Double Yield Cucumbers, reported to produce up to 17kg per plant.  At half way through the growing season, I can’t yet say whether we’ll be close to that, but based on the incredible masses of yellow flowers from late December onwards, it definitely seems plausible.

Seven of our eight seedlings popped up within a week, and they’ve all developed into strong, vigorously flowering vines.  Here is our cucumber pyramid after 9 weeks. We picked our first two cucumbers just after New Year, and we look to be set to have a glut of them by late January.

Again, we hand watered the seedlings for the first few weeks to help them establish, and now they seem to be thriving on 2-3 buckets of water per week.

While we didn’t do a control to our experiment, we’re definitely happy with the ease of care that this system allows.  It only takes a couple of minutes to fill the bucket, and watering this way not only gives a little dose of nutrients to the plants each time (thanks to the manure in the bottom of the bucket), but it also helps keep the water off the tomato leaves.  We haven’t had any problems with disease or mould, and all our plants are strong and vigorous, with good quantities of fruit forming.

It was 41 degrees this week, and we filled the buckets that morning before the real heat of the day struck, and by the end of the day, the cucumber leaves still looked fresh and healthy, not wilting and sad the way our cucumbers, pumpkins and zucchinis normally look after a hot day.

The only negative we’ve noticed, is that the tomato bucket tends to have a constant pool of water in the bottom, which means that there is smelly stagnant manure-water available for mosquitoes to breed in.  We’ll drill a few more holes in the bottom of this bucket before we plant next year’s tomatoes, which will hopefully overcome this.

Our garden guardian doing his job.

Please join the conversation, and add your comments below any blog posts that resonate with you. We'd love to hear your thoughts, experiences and suggestions.